At the moment you could have two objects which both have symmetry set to world y-axis. If you join them the new object will automatically change to having local x-axis. The same happens if both objects had symmetry turned off - once joined they will have local x-axis active. Even though I know this happens, I’ve often been caught out by this.

I think it would be more intuitive if objects which have the same symmetry type, if they are joined, then the new object keeps the same type of symmetry.

If objects with different symmetry types are joined then perhaps the new object could keep the symmetry of the largest object being joined.

Or perhaps we could select this behaviour as a preference somewhere in settings.

i encountered the same issue yesterday. when i merged the objects it was impossible to work on with symmetry.

does that mean, when a character/anything is designed, consisting of multiple objects i should not join them? thats a pain in the mind…

is there another way to have symmetry though joining the objects - moving the new gizmo perfectly is impossible. i also tried to save a gizmo from one object and use it afterwarts - also not working.

Hi, I think we might be talking about slightly different things. In my feature request I’m saying that the new, joined object should have the same overall symmetry as the elements that were joined to make it; so for example if you joined two objects which both had world z-axis symmetry, then the new new object, as a whole, would have world z-axis symmetry. I’m not suggesting that each individual part of the joined object should keep its previous symmetry.
I think this might be what you are saying. Please correct me if I haven’t understood you right, but I think your issue is this: let’s say you create a character, and that character has something like a symmetrical gun on it; you want to join all the elements of the character together, including the gun; but once you’ve done that you can’t easily make changes to the gun on it’s own and keep it symmetrical? If this is the issue you have, then I think you just need to separate the joined objects, work on the gun separately with local x-axis symmetry active, then join all the objects back together.
To separate joined objects, go to scene menu, select the object, click the 3 small dots, a new small pop up menu should appear, and at the bottom of it click separate.
Hope this helps.

you are correct, your request is different from my issue.

I am not very familiar with this type of workflow, I thought I can add objects, merge them, edit them further and keep the symmetry alive.

So I will try it at the next occasion like you said.

Thx for your help

No problem. Btw you can only separate objects that you have “joined” in scene menu. If you voxel merge them you won’t get the option to “separate” later.

I like to merge objects out of symmetry to one big thing - for interessting organic features. tried it yesterday and I cant get the symmetry after on.

Is my workflow anyhow doable, or do I have to work with objects, and in the latest stage i can join them, when I dont need symmetry again.

For example I make a sphere and on top of it are two cones - but they overlap in symmetry - then I put alltogheter to voxel merge - and then I cant operate on these with symmetry.

When I just use objects, it somehow limts the ability to create…

correct me please - i am still new - i am a engineer with CAD knowledge, where everything can be moved to planes and so on…

Can you post a screenshot of the type of object that is causing you trouble. If possible try and draw on the screenshot where you want the line of symmetry.

You can definitely use symmetry on objects which have been voxel merged, but the symmetry will apply to the entire object, not any of the individual parts that you merged to create it. For example, if you want to create a character with horns; you might start with a sphere for the head, and add 2 cones for horns; you can voxel merge them all together and then sculpt. If you have x-axis symmetry active, both sides of the character will be symmetrical as you sculpt. However, each INDIVIDUAL cone will not stay symmetrical; it will be symmetrical with the cone (horn) on the other side, but it will not remain a symmetrical object in its own right. If you want each horn to be a perfectly symmetrical object in its own right, you need to work on it as a separate object, then merge them at the end.

If you search YouTube for “nomad sculpt symmetry “ several good videos appear which might be worth watching.

(Edit: it’s always worth checking that symmetry is turned on in the left hand column for whatever tool you are using, it’s an easy mistake to make!)

Here’s an example: I added a sphere, then I added a cone which I moved into position; I mirrored the cone, then validated it. I am using the move tool; the symmetry settings for it are shown 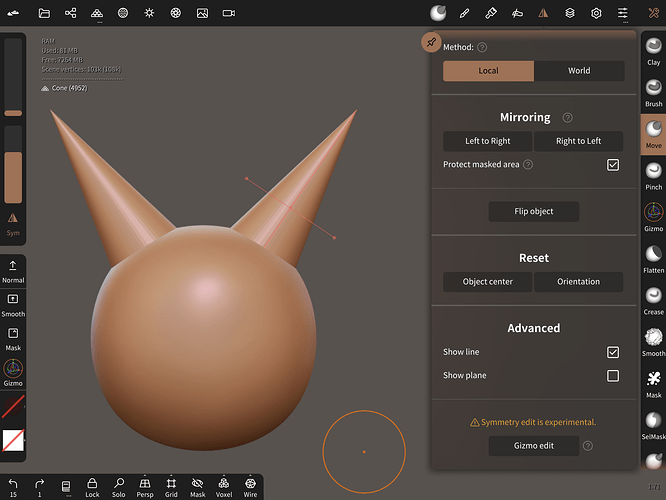 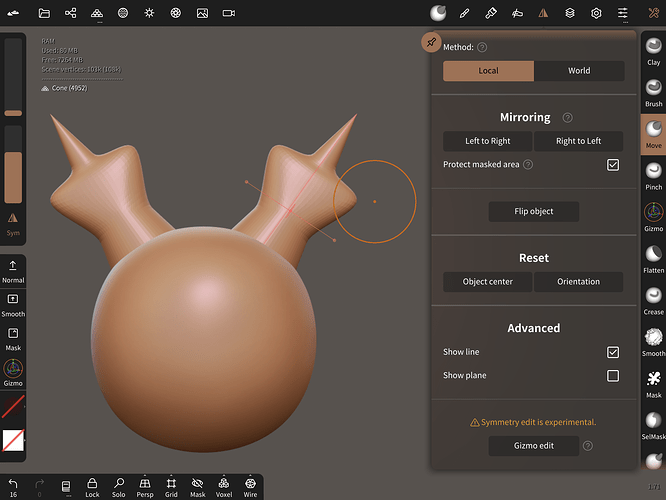 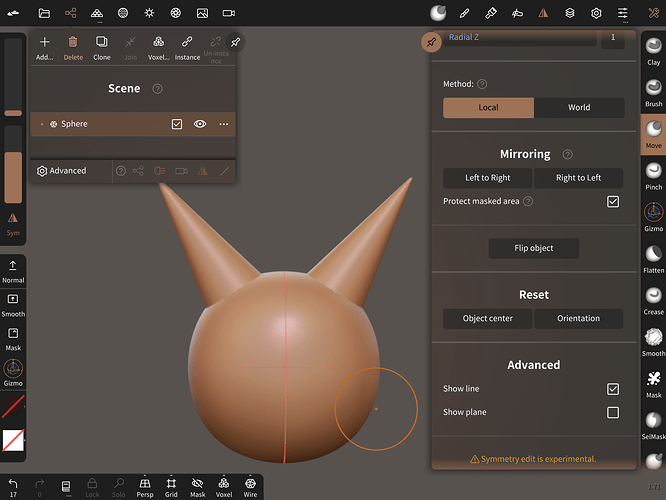 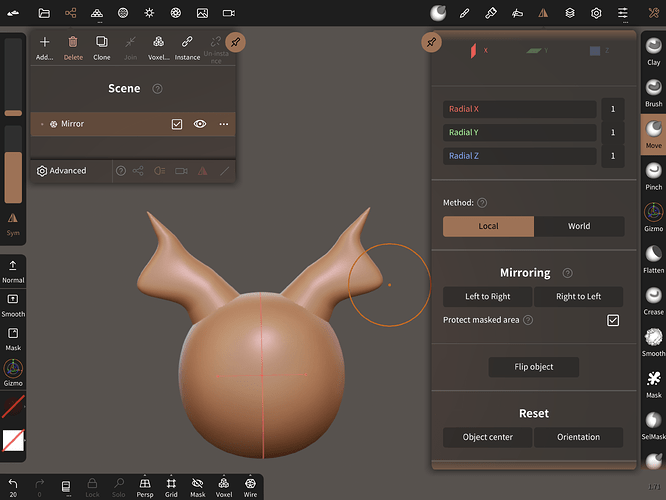 thank you for your answer, I think I got my problem by joining not all parts, and get a wrong new symmetry line afterwarts. If i do it like you did it works. Thank you again for your help and time.