Hi! Since this is the first time for me writing here, let me just say how much I love Nomad sculpt! Thank you for this awesome software!
I just received the new IPad with M2 processor and there’s an issue with the Apple Pencil hover functionality.
Basically if I’m rotating the camera with my finger and the tip of the pencil is close enough to trigger the hover functionality , the camera goes crazy and I lose control of it.
I really hope this makes sense, it’s rather annoying unfortunately.
Thank you!

This issue will be fixed.

I cannot test the hover functionality with the pencil itself (only trackpad and mouse).
Is it working fine if only the pencil is hovering?

Yes, the issue only appears when using the finger to move the camera and hovering at the same time. Hovering by itself is totally fine.

Ok, was playing with Forger (sorry

) and found out it happens exactly the same thing. Hopefully it helps.

Good day. I have the same problems as Mr.zizza, also iPad Pro M2 with apple pencil 2, Nomad V1.68. I would like to add another issues related to the hover mode of the pencil:

For example, if you sculpt with the clay tool and move the pencil away from the screen, it keeps sculpting until you are out of the pencil hover area. This almost always ruins the stroke.

If you use the pen in gizmo mode to move or scale the object, moving the pen off the screen to “release” will continue to scale or move the object a bit. This makes it impossible to accurately place or scale objects with the pen.

I’m not sure if these issues have been fixed yet, but a simple button to toggle hover mode on or off would be great (if possible).

Yes unfortunately it is very annoying. If there’s a control on when the hover is triggered could you just disable it whilst the camera is dragged around perhaps? I personally would rather not lose it entirely as it’s a great feature to preview the stroke position and size.

I am experiencing this too. I love seeing the hover preview but it causes everything to glitch/spasm so much inside nomad. Took me a little bit to get used to the chaos lol.

Yeah, sux not to be able to take advantage of the hover feature. Thankfully it can be turned off in the iPad settings. Apple Pencil → Show Effects when using Pencil

Procreate is having issues too… Hopefully both will be updated soon

Hello! Thanks so much for fixing this!

I have noticed another issue: the pen position doesn’t reflect the center of the brush but rather an arbitrary point at its left it seems. Please see attached photo. Thanks! 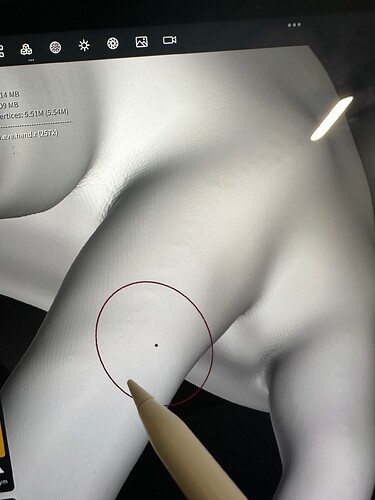 On Nomad 1.70?
I don’t have the latest iPad to test and can’t replicate the bug with trackpad hovering.
Does the cursor “jump”?
Does the problem occur you release the pencil from the screen or when the pencil exits the hovering zone?

Does it happen with clay or other brush or only Move/Drag?
Is it still offset when you are sculpting? (I can’t see the dot well on the video)
Is the offset still there when you stop sculpting? (in the video you move the pencil far way)

Weird… I’m not seeing that here. Does it happen in a new scene with just a sphere too? Wonder if it’s some combination of mirror settings with repeater or something. I can’t find a combination that gives me that offset.

Yeah it seams to be happening just on that project

Wonder what would cause that… Maybe using “Add to scene” would clean it up(?)

I have the same problem on iPad pro 11 m1. In old and new projects cursor position bugs. When I use normal mode and rope stabilizer 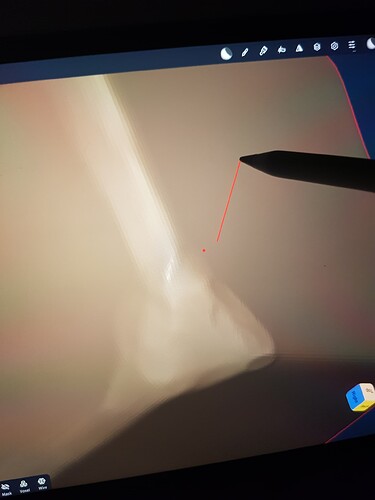 I have the same issue. It starts kind of randomly (mostly on crese) and it spreads on to another tools as wel, and to fix it i have to reset the app.
Im using ipad pro 2018 w/ pencil gen 2 ipad os 16 and nomad 1.7. It might be due to used mirror as BiteyThing pointed out

I just had this happen to me last night as well.

I didn’t really think about it until reading this thread. It happening after crease seems to be accurate. Closing Nomad and restarting seems to have fixed it.

I’ll pay closer attention to what I’m doing next time I see it happen.

I managed to replicate the bug. It took me about 500 history records from plane sphere. I have used: clay tool, flatten tool, move tool, smooth tool, crease, brush, inflate, remeshing from time to time and adding one sphere and mirroring it. I ‚ve turned display of and on and now dot is offset to pencil tip

Is the hover functionality worth the upgrade? (Ill never have the money for it but I am curious about it’s usefulness - it always seemed like a pro, I’ve heard it’s useful for X,Y art strokes