Model in turntable isn't centred no matter what

I rendered my second ever sculpt, and I’m super proud of how it came out and want to do a turntable of it! However, when I try, it isn’t centred. I’ve been trying to find tips about this for the past few hours and I feel stuck and was hoping someone could help me here.

I’ve tried resetting the view, deleting saved views and moving everything to the centre of the world… But it still spins off centre. Any ideas? And if not, is there a possible way to set it so that it rotates around one of the objects specifically (with other layers still visible) to at least give the illusion it’s on centre? Thanks for any help! It means so much. I’m new here

The turntable rotates around the center of all objects visible and/or selected in the scene, not world center.

If you want it to rotate around world center you have to either:

There may be other ways of doing this but this is how I’ve done it in the past.

It would’t change anything because clicking on turntable reset the pivot on the center of all visible objects.

You can double tap on a point to change the rotation focus (not ideal though).
Otherwise 4-finger tap to make the UI appear again (it will still rotating, so you can hide/show objects afterwards).

Next release will have 2 mode, one that reset the pivot on the object’s center and the other on the world origin. 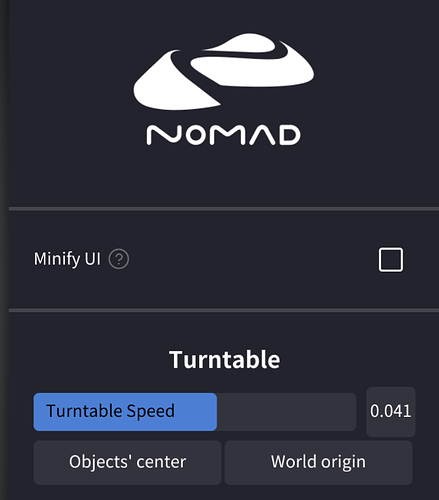 So this would mean you’d able set a turntable around, say a character model, that was inside a much larger stage area, say a cylinder, without the turntable camera instantly zooming outside of the cylinder?

A nice addition for some future time would be ability to select a camera and give it a predetermined orbital path and focal point that could be selected for turntable renders…?

Thank you so much!!

Double tapping on certain objects ended up centering it pretty well! I thought all hope was lost for it lol

Also those new features in the next release look like they’ll come in handy, I’m excited!
Thank you so much for your help. Love this community already