Hej guys, so I updated to the latest version and when I opened the app I found out it completely decimated a model I was working on… it took a great effort to sculpt that thing, So this has left me borderline in tears… 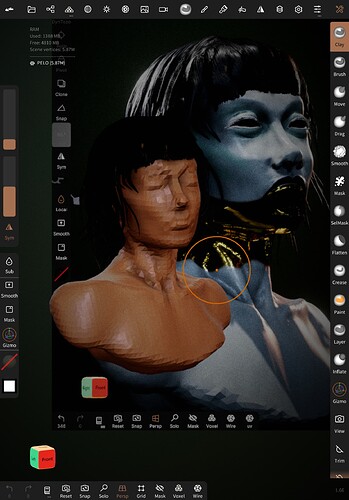 My technician always says:
If you don’t have a backup, it’s your fault.

Hate him for this, but it’s true.
Anyway. You maybe are just on lowest subdivision level?
Stupid question, but worth a try.

Are you sure your multi resolution slider isn’t just set to the lowest level? because I still see that you have more than 5 million poly in your scene. Can you show the wireframe please?

Yeah the backup thingy it’s on me….

I was connecting the dots and I realised what actually happened, it’s an ipad and nomad interaction problem that I’ve been having for some time, when I want to swipe up to minimise the app, it still recognises the touch and at the bottom i have the voxel shortcut, I pressed it accidentally when going to the app store to update nomad, now the funny thing is that i had saved before that but when updating it saved the project somehow? And the history record was clear… so I’m not sure who’s to blame… am I swiping wrong every time? Or is the ipad who’s messing with me? Or nomad is recognising the touch when it shouldnt? The bottom line is that I remade the face and got to use the subsurface scattering tool which is insane… so… sorry for the confusion

Because of this accidents, I removed voxel remesh from shortcut list. I am not remeshing that often, so I used it via regular menu.