I’m sure this is101 for most of you but , just trying my first ever character sculpt.
I’m doing Vincent, from Corpse Bride.

Wanted to dig out my real life figurine of him but couldn’t find, so resorted to internet image search. (Not ideal )

Anyway, I’m sure there;l be plenty challenges throughout but the first Is…

I’ve started with the head of the character.
I followed a tut from SoutherGFX on his YouTube channel, using what I remembered, I outlined the head, started with the eye sockets, moved down to the nose, then lips, , but what I overlooked, was the need to bring the chin out (at least as far as the nose) (from what I can remember of the real shape of this characters head).

So… I’ve started etching the lips, but then I turn to side angle and realise, the chin is wayaayyy too recessed, so I start ‘’move’ing chin pulling it out forward, this is also grabbing and effecting the shape of the lips too much.

Rather than have to re-do the lips, I thought, ok maybe I can add a ball (sphere) in the chin area, somehow weld it to the overall head shape and mould it in to place (basically to add bulk/volume) to the chin.

But my sculpting skills are still very noob so I’m wondering if it would take less skill and time to work on the chin another way (rather than use a sphere and try to mould the two piece together).

Does anyone know what I’m talking about and have any tips or different approach at this point?

NOSE:
Also, when it comes to nostrils, this is the first time I’ve needed to mould a ‘cavity’ of sorts.
What might be the best way of doing this? So far, I’ve just tried to DRAG, by tilting the model backwards and just stroking in right direction. But it tended to create a kind ‘pointed’ cavity, where the tools is stretching the geometry into the recess to a sharp point (the further you drag, the more pointed the point etc)

I had similar results with the move tool.

What about this…. If I were to create ‘tube’ shapes esssentially, and slot them in place, is there a way to basically remove that shape/volume from main head model geometry?
Similar to how in SketchUp, you can use subtraction tools to remove one shape from another piece of geometry. 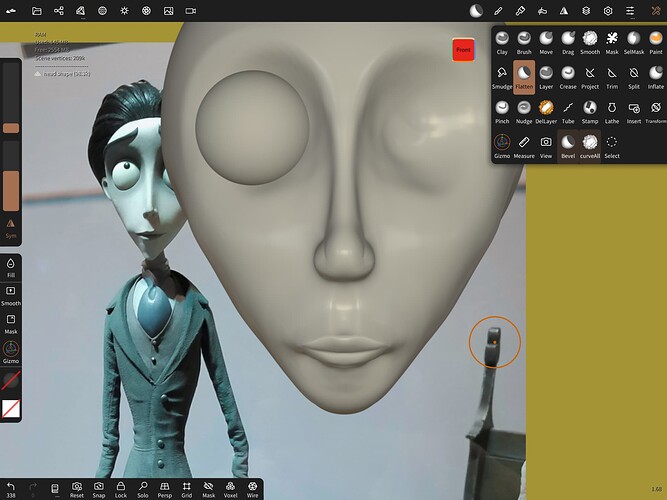 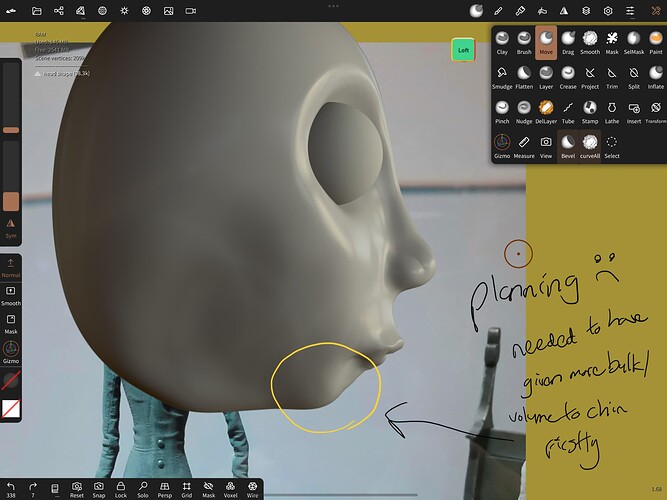 For the nose and the nostrils i do it the same way as you. And after that i do a voxel remesh and a Cleanup with Smooth. Always works, always looks good.

You could also use the Mask Tool to mask the area and move it inwards with the Gizmo.

Your last question: You can Boolean the Tubes withe the nose. What you need to do: Create the tube, put them in place, activate both (head and tubes) but make the tubes invisible. Then do a voxel remeseh. It will substract the tubes from the head then.

For the chin try this: First mask the chin. Then invert the mask, so that the chin is the only thing you’re able to manipulate. Everything else like the mouth should now be safe.

Thank you for the tips. Appreciate that. I’ll have to try it out.