Thanks for the reply.
For me this is a real shame, it was a function I used a great deal, almost all the time, in fact. Was it causing problems with the app? I was always very impressed with how well it functioned. Without this capability it makes sculpting certain kinds of form very difficult.
I would definitely love to see this capability reintroduced somehow - or some kind of workaround using the existing features.
I appreciate you must have removed it for specific reasons, but it always seemed wonderfully simple and effective.
If you have any suggestions for a workaround I would be very keen to try. Thanks.

How were you using it?

I was using it to create quite complex, almost mathematical/geometric abstract sculptures; if you look at the Wikipedia entry for “seifert surface” and look at some of those images, it will give you an idea of the type of thing - these types of shape often have complex radial symmetry, but not standard plane symmetry. Most people would use a modelling program to achieve this, but I like using the iPad and Nomad so much more - at least initially to come up with ideas.

To clarify you are talking about brush setting, not object cloning?

Yes, brush settings.
A very simple example of how I might use it is to decorate the surface of a sphere with a complex, radially symmetric pattern. Create a sphere primitive, now set the multiple axes of radial symmetry you want. Now use a brush, maybe the mask tool, to create a pattern on the surface: because there are multiple axes of radial symmetry working at once, you can make your pattern join together effortlessly and quickly around the sphere, even though there is no planar symmetry. You could then use the mask pattern you have created to emboss or engrave the surface. The same principle works with any brush though.
I’ve been trying to replicate this technique with the new nomad version, but I don’t think there is any easy way.
If you are still able to use your previous version of nomad, you could experiment with the example I gave above, and see how nicely it works. I think people can use it to design ornamental objects where you need a design to wrap completely around a sphere-like object with radial, but not planar symmetry - a patterned ceiling light shade would be a real world example.
It would be great if you are able to reintroduce this ability somehow; like I said before, I don’t think I ever had a bug or a crash while using it, it just worked really well.
All the best
(Edit: the crucial thing is how complex you want the radial symmetry to be. In the current version of nomad, you can decorate a sphere with radial symmetry in 1 axis; but if you want/need a more complex form of radial symmetry e.g. radially symmetric in 2 axes, that becomes really hard to do, whereas in the previous version it was really easy)

Are you referring to the ability to sculpt on different planes at the same time xyz? I’m not sure of your question.

Do you refer to this? 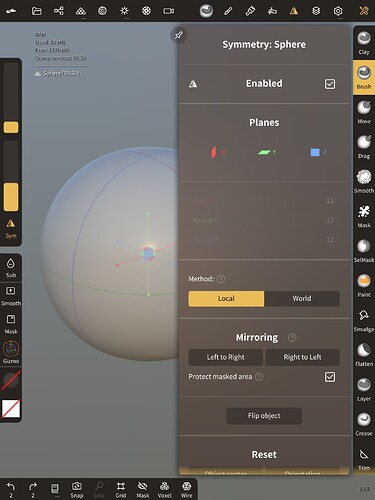 I’m going to create a visual example to make things clearer, but what I’m referring to is specifically related to radial symmetry. In the older version of nomad you could activate multiple axes of radial symmetry at once. In the newer version you can only have 1 axis of radial symmetry active at a time, i.e. just x-axis radial, or just y-axis, or just z-axis at a time. This makes creating certain kinds of shape difficult. I will post a visual example later today. It’s quite tricky to describe with just words!

So here’s a very simple example. This ovoid shape has been painted with a design that has 2-fold x radial symmetry, 2-fold y radial symmetry, and 2-fold z axis symmetry. In other words, you can rotate it 180 degrees on any of the 3 axes, and it will look identical to before the rotation. In the screenshots observe the orientation cube, and see how the top looks identical to the bottom, the left side to the right and the front to the back. This cannot be achieved with planar symmetry, only with radial symmetry.

In the old version of nomad it was effortless to create this, you would just input “2” into the x, y and z radial symmetry settings, and have them all active at once.

In this new version I have kind of “faked” the same effect just to create the screenshot. I had to create the ovoid shape, then trim it in half; I created an instance of the half which I then rotated 180 degrees so it matches up with the other half. I then painted with 2-fold y radial symmetry activated. So what you’re actually seeing in the screenshots is half an ovoid, and an instance of it that has been turned upside down. The last screen shot shows this. This is not a real solution, however, because you get problems where the two halves meet. This is especially the case if you want to actually sculpt using this type of complex symmetry, not just paint. If you can think of a way round the problem I would love to know. 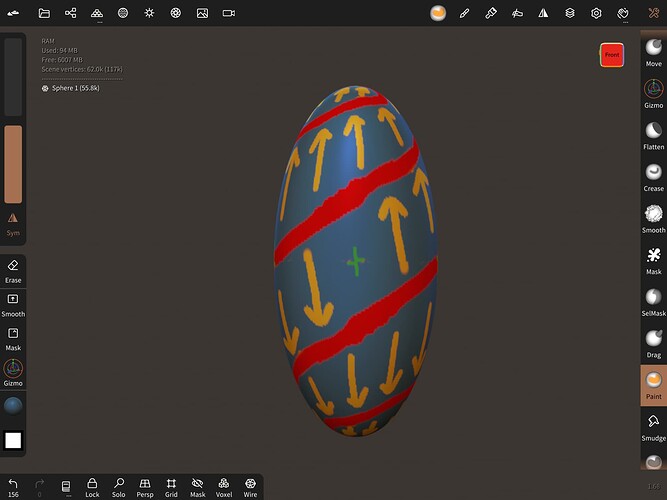 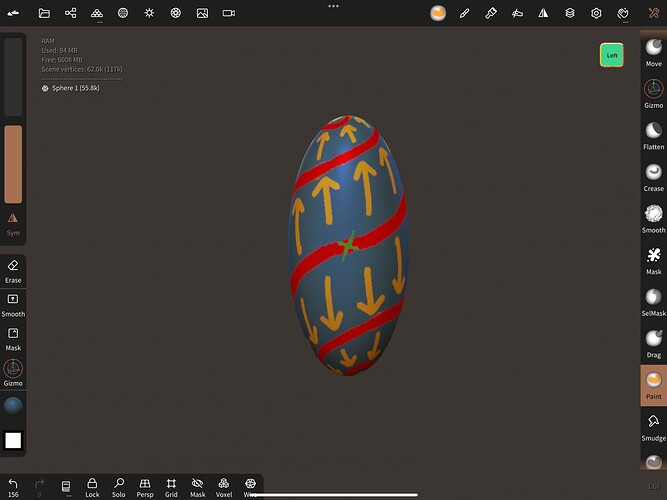 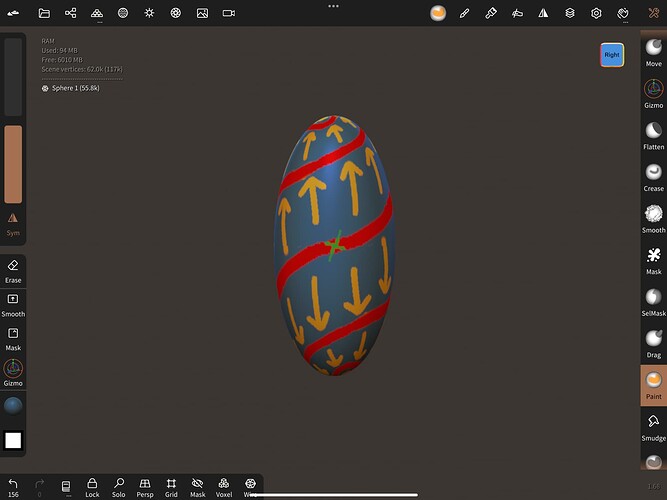 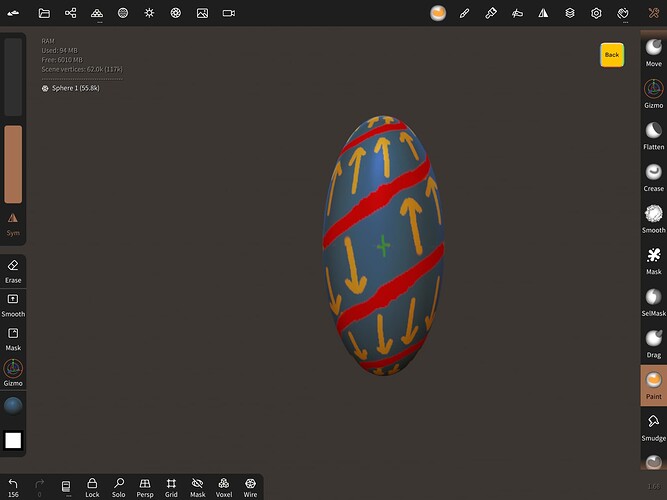 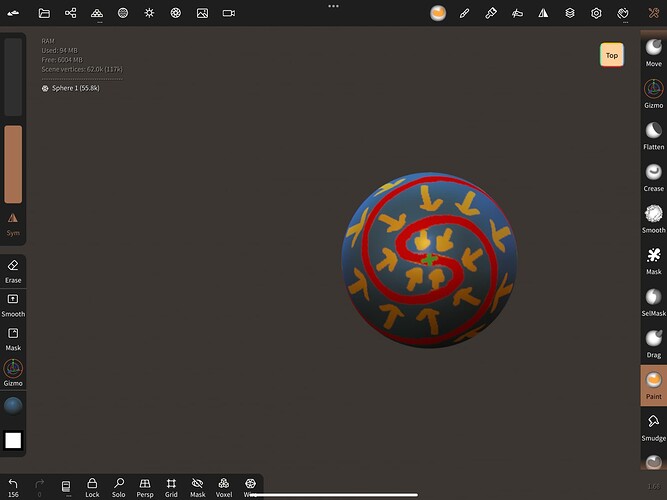 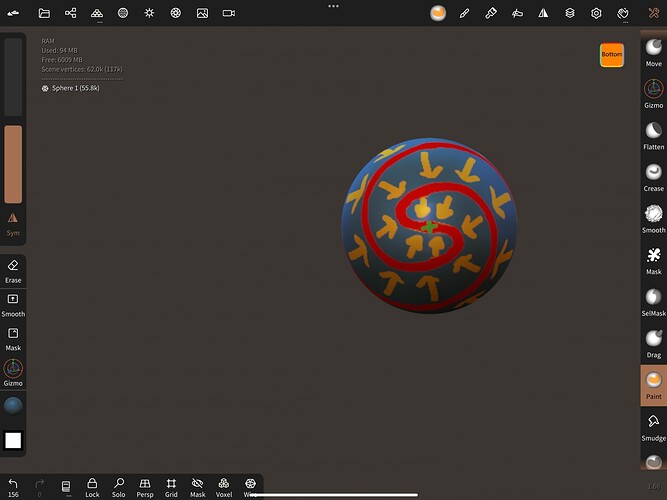 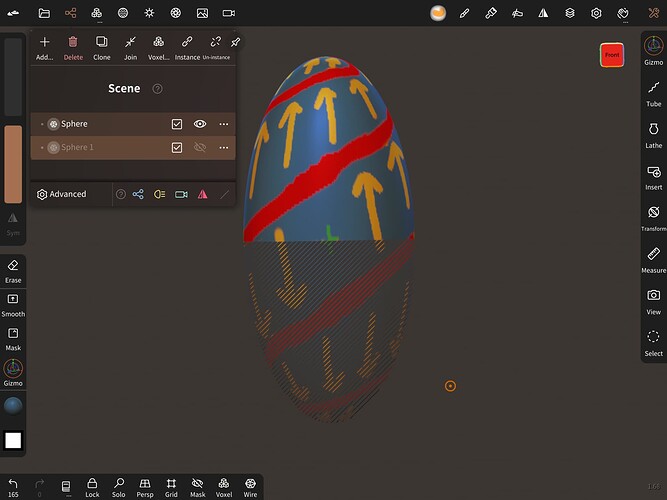 I wish I could help but I’m still new to all this,
when Im painting or using a sculpting brush to make tire treads or spokes or other things I use can use Radial X,Y and Z at the same time while drawing and sculpting on a surface but I’m sure you where using an another function I was never aware of from the previous versions.

I think you can only have 1 axis of radial symmetry active at a time with the newest nomad version - this is what Stephane, the developer, said in reply to my question. Perhaps not many people ever made use of this earlier capability, but for me it was a game changer in the things I was doing.

I see what you mean, other than what you are trying to accomplish have you messed with any of the repeater functions, I’m still learning them you can make amazing shapes that where not possible before.

Since you did mention Seifert surface shapes, with the nomad repeater functions one can create objects like these and more.

I haven’t played around with them much yet. Would you use the curve repeater to try and make siefert surfaces? It’s not immediately clear to me how that would work, but like I say, I haven’t used them enough yet to really know.

If I had any experience with seifert surface yea I would try to make an approximation to anything remotely related or considered seifert surface. By using repeater functions.

Please excuse my poor attempts of a type of seifert surface representation, since I’m just trying to make unusual shapes using repeaters lol. And that’s mostly my point for you to explore the repeater functions in nomad. I’m sure you can make better use of it 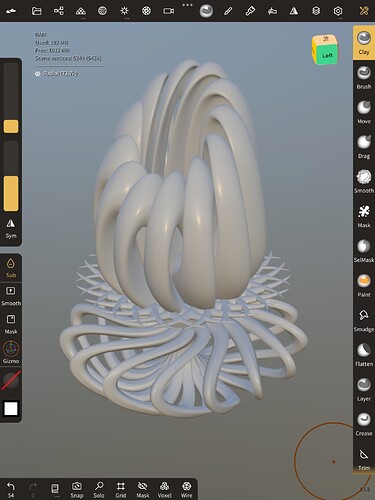